Celebrating the humour, the pathos and the colourful characters that inhabit our waiting rooms, GP the musical takes an ordinary day in an ordinary general practice and adds music and fun.

The writers, director and performers are all practising GPs, who take time out from their day jobs to sing and dance about their day jobs.

GP the Musical premiered at the National GPET Convention 2012 in Melbourne on the 4th September 2012 after a preview performance in Daylseford, Victoria on the 3rd September.

It received overwhelmingly positive responses from the general public and medical fraternity alike. The cast was keen to perform again.

It had 5 sell-out shows at the 2013 MICF, at the Gasworks theatre, Albert Park, and received glowing reviews from both audience members and critics.

GP the Musical was then performed on Thursday 17th October 2013 at the Darwin Convention Centre as part of the GP13 Conference.  You can find a blog post (with photos) about the Darwin show here.

It  “came back again” for a sellout season at the National Institute of Dramatic Art (NIDA) in Sydney 14 – 17 September 2017.

GP the musical article in MJA

GP the musical in Pulse+IT

You don’t listen to a word I say (GPET)

The one to see is your GP (MICF)

Lyrics: When did the Sadness Come?

Here in this picture with my degree

Proud, proud parents next to me

Across my face spreads a smile so wide

Not a trace of what’s hidden inside

I worked so hard, you didn’t understand

Left behind, no wedding band

Late at night when I’m all alone

I see your number’s still on my phone

All their problems day after day

Take their toll, can’t get away

The dying hand that I held so tight

Her frightened face keeps me awake at night

I didn’t see the sadness come

Ignored the signs; brought me undone

I was trapped inside the doctor myths

I couldn’t sit where the patient sits

I couldn’t heal myself 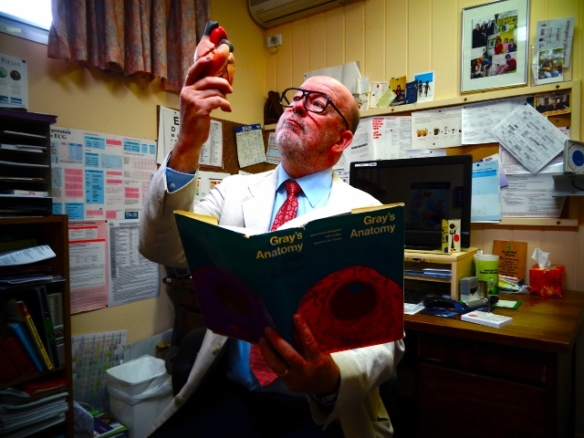 Writers of GP the musical_Gerard and Genevieve

3 thoughts on “GP the Musical”