It’s an early morning flight. You’re tired, grumpy and regretting not grabbing a coffee before boarding. The seatbelt sign is turned off and the mouth of the person sitting next to you is turned on.

She starts yapping away, trying to engage you in small talk. Not wanting to appear rude, you reply, all the while wishing she would just shut up. The situation turns from grim to dire as she moves from the trivial to the personal.

I was en route to present at an international medical humanities conference in the US, and, I have to confess, I was that annoying talker. Why? I noticed a mole I didn’t like on my fellow passenger’s forearm.

Now, I’m certainly not in the habit of giving strangers unsolicited medical advice, but I was sitting there confronted by this highly suspicious naevus, my fingers itching for a dermatoscope, and just couldn’t stay silent. The young American told me that it had been looked at “a couple of years ago” but admitted that he’d noticed recent change. He hadn’t been concerned about it before boarding, but I made darn sure he was before disembarking. I gave him my business card (to demonstrate that I did indeed have a medical degree), and two weeks later received a very grateful email. The lesion turned out to be an invasive melanoma with a Breslow thickness of 1.3mm

On the very next leg of my journey, I again had cause to advertise my profession. Regular readers may recall that the last time I heard “Is there a doctor on board?”, I slid down in my seat and waited for someone else to respond. This time I attempted to redeem myself by volunteering immediately when the call came over the PA system. Two minutes later, faced with an unconscious young woman, my good-deed buzz was replaced by alarm bells chiming “panic”.

According to the nearby passengers, she had been acting “weirdly” before “passing out”. I wondered if this inappropriate behaviour included asking strangers about their moles. She became responsive after some oxygen, but was confused. Later, she started complaining of severe chest, abdominal and back pain. To cut a long story short, the combination of hypoxia, methamphetamine and dehydration had precipitated a sickle cell crisis. The next three hours were not much fun for either of us.

Half an hour in, the drinks trolley came around. Unlike on many of our Australian carriers, a free beverage is offered by this American airline, although the tiny pretzel packets have been banished along with the term “air hostess”. With my patient stable at the time, I requested a tomato juice. The attendant opened a can and half-filled a tiny cup. When I politely requested the remainder of the can as well, he looked at me as if I’d asked for pretzels and called him an air hostess.

“Passengers are only eligible for one free drink,” he pronounced. 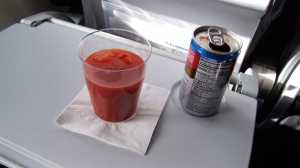 “Hey, I’m saving a life here. Surely that’s worth the extra half can.”

“We are not allowed to give any kind of gratuity to doctors who volunteer their time to assist in an emergency.”

While I appreciate that this situation presents a legal quagmire, the fact is that in the US, this crazy country, I’m expected to tip a waiter in a bar for pouring me a glass of tomato juice, but I can’t even get an extra half-can of unpoured stuff for delivering three hours of after-hours emergency care. I know I’m from Down Under, but it all seems a bit upside down to me.

First published in Australian Doctor on 17th May, 2012 On Unsolicited Advice